Soviet animation was closely connected with folklore themes in the post Second World War years. However, it was not always the case. Early Soviet cartoons such as Soviet Toys were mostly propaganda pieces aimed at both adults and children. In the 1920s folklore themes were not considered appealing for future-oriented avant-garde Soviet culture. Things started to change in the 1930s when Stalin came to power. With rise of nationalism Soviet ideology changed to national roots and history. Interest in folklore was revived. One of the early folklore cartoons for children was produced by the newly-established major Soviet studio, Soyuzmultfilm. Black and white Ivashko and Baba-Yaga was filmed by the Brumberg sisters, Zinaida and Valentina. It is based on the folktale of the same name. Baba-Yaga, an evil witch, kidnaps a peasant boy, Ivashko (Ivan), and tries to eat him, but he is able to outsmart her and escapes home to his parents. 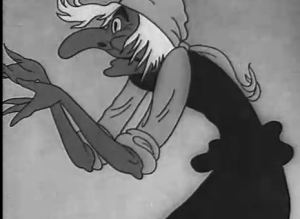