Tower Bawher (presumably Bawher is a reading of Башня, bashnia, a tower in Russian) is an animated short by a Canadian animator Theodore Ushev (originally from Bulgaria) made in 2005. It is a unique homage to the avant-garde Russian artistic movement of the 1920s featuring rich visual references to several of the most important Russian Constructivist artists: Klutsis, El Lissitzky, Rodchenko, the Stenberg brothers, Tatlin, Vertov, and others. 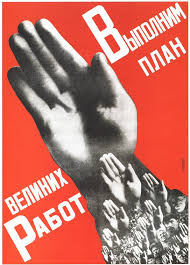 El Lissitzky, graphic designer, and book illustrator, Project of the Affirmation of the New Vladimir Tatlin, the project of the Monument to the Third International

The Stenberg brothers. Poster for Man with a Movie Camera by Dziga Vertov, filmmaker, animation and montage pioneer

It captures energy and enthusiasm of early Soviet culture thanks not only to the images but also because of the Georgy Sviridov’s acclaimed piece, Time, Forward! written in 1965, three decades after Stalin crushed Russian avant-garde and replaced it with Socialist Realism. During the Thaw (1957-1965), the avant-garde was somewhat rehabilitated. Sviridov’s piece was written for the movie that took place in the early 1930s. Enthusiasm and passion should not obscure the fact that this Tower, symbol of the new world, like Tower of Babel, fails to be completed. This abstract film is an animated constructivist ballet, with an amazing sense of rhythm.

Caution, the Doors Are Opening (Осторожно, двери открываются) is a beautiful stop-motion animation by Anastasiya Zhuravleva. One day of a busy subway featuring the most prominent buttons. No knowledge of Russian required to enjoy.