Russian folktales were often adapted for animated films, and for many Russians cartoons, together with folktales are the first introduction to folklore. The folklore characters went through several stages, from comparatively straightforward transformations in some early films to didactic Socialist Realist versions in the late Stalin era, to artistic masterpieces of the 1960-1970s, when folklore-based cartoons fused modernity and tradition and obtained “doublespeak” allusions. The trickster is one of the most appealing characters for animation. The trickster creates comic situations, brings innovation, and is often associated with satirizing norms and customs. The Russian trickster is the fool (durak). The fool in Russian medieval culture was a clever revealer of truth, eccentric in clothing, speech, and behavior. In Russian culture, the trickster figure blends several characters that were historically connected: the Holy fool (iurodivyi), the Harlequin/Wandering Minstrel (skomorokh), and the Outlaw (e.g. the thief, Cossack, or the peddler).

The story about Emelya the fool and the magic pike is among the most well-known. In Russia, Emelya is depicted in figurines, paintings, illustrations, and sometimes is seen as a symbol of Russia, slow to saddle up, but rides fast. In the folktale, Emelya is the third son, unmarried, untidy, lazy, and his only motivation to do something is the promise of a red kaftan (overcoat). In the folktale, Emelya catches the magic pike and who gives him a magic ability to fulfill his wishes. Most famously, lazy Emelya who spends most of his time on a warm massive Russian stove, wishes for the stove to give him a ride.  In the folktale-based animated film In a Certain Kingdom (V nekotorom tzarstve), 1957 (directed by Ivan Ivanov-Vano, screenplay by Nikolai Erdman) Emelya is significantly different. He is not a lazy lad, but he is shown quite capable of working. Emelya is also kinder: he lets the pike go without asking anything and the pike rewards him. He is quite peaceful until his motherland is threatened by foreigners. 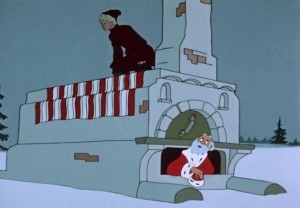 Emelya on his self-propelled stove. The Tsar is hiding from invading foreigners

Figures of pretentious westerners are among the main contemporary features of the film. The generic foreign prince who courts the Russian princess is shown in 18th-19th-century European dress. Presumably, he is a French prince who barely speaks Russian and wants to marry Maria, the daughter of the tsar. The foreign prince is shown as a tall figure with unnaturally sharp features reminiscent of a rooster (possibly another hint at his French origin). He is extremely effeminate, constantly powdering his face, looking at a pocket mirror. Princesses Maria does not mind his courtship (approved by her father) until Emelya sees her portrait and wishes her to fall in love with him. When the foreign prince is rejected by Maria, he launches an invasion. The image of foreign grenadiers marching in the snow reminds us not only of Napoleon but also of the recent German invasion. The tsar’s troops are defeated despite their general’s comic appeal: “They [foreigners] gave our tsar the fig, let’s all die for him!”, and only the trickster, becoming patriotic when he sees the destruction the invaders are causing, is able to save his native land by making a magic broom to wipe out the enemy. 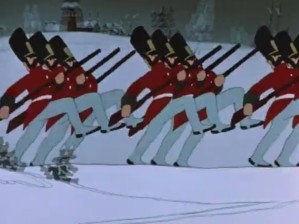 Emelya is depicted in a humane fashion, with normal physical appearances. In contrast, the Russian court is shown in a somewhat comical way: the tsar is short, bearded, and single toothed; his worthless general is shown with cartoonish whiskers. As a result of Emelya’s victory, the tsar loses his crown and flees abroad, while Emelya marries princess Maria and rides the stove home with her. Thus, in sharp contrast with the folktale, Emelya in this cartoon embodies the ideal of the Russian nation: he is witty and kind, able to work and play, he is not aggressive, but he can defend himself if bothered by foreigners or the tsar and his government. Foreign enemies are always ready to invade Russia, but they cannot defeat her people. The parts of the folktale that shows Emelya’s weakness and passivity are completely omitted. In the film, Emelya is a smart peasant, salt of the earth, and he does not need the pike’s magic to become a handsome and clever prince. 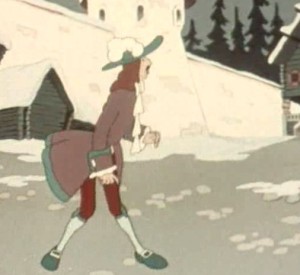 A Cloud in Love (Влюбленное облако) was made in 1959 by Roman Kachanov, one of the pioneers of the Soviet stop motion animation. During the Stalin era in Soviet animation, realistic style with extensive use of the rotoscoping technique was dominant. In the late 1950s and in the 1960s, during the Khrushchev’s Thaw Soviet animators revived stop motion technique. Kachanov produced several dozens of animation films both hand-drawn and stop-motion (puppet animation). Among his films are a well-known trilogy about Cheburashka, The Mitten, and sci-fi The Mystery of the Third Planet.

A Cloud in Love is a unique film based on a script by a Turkish poet Nâzım Hikmet Ran who lived in exile in Soviet Russia. It’s an allegorical story about an evil desert spirit who tries to destroy an oasis that is tendered by beautiful Aishe. Luckily, a Cloud falls in love with her and protects the oasis, although it costs him a life. It features a mixed technique (puppets, marionettes, and hand-drawn animation). In relatively low violent Soviet cartoon protagonists usually, survive and overcome challenges. However, in this cartoon, the main character (Cloud) perishes. It is not very surprising if one takes a look at the desert spirit. A mustached oriental villain that tries to destroy the oasis is not only a political satire on Turkish rulers by Nazim Hikmet Ran. The Soviet Union at this time was going through the condemnation of (some of) Stalin’s crimes. Children’s cinema and literature were less affected by the Thaw. Still, images of a ruthless and treacherous oriental ruler and his victims unavoidably create some allusions. Oriental overtones of Stalin despotism are empathized by historians (such as Robert Tucker) and his political enemies (such as Trotsky who called him Genghis Khan). Of course, this film is far from being a political cartoon. However, the presence of a menacing force that brings death and destruction reflects a mood of the day.

Olga Khodatayeva (1894-1968) was one of the first women in Soviet animation. She mastered fine arts in Moscow, worked as an illustrator, and joined the industry in 1924. She worked in Sovkino (later Mosfilm) and since 1936 she was employed as an animation director by Soyuzmultfilm, the biggest Soviet animation studio established in the same year by Stalin.

In 1928 Olga Khodatayeva produced a silent animation short Samoyed Boy (Самоедский мальчик), an anti-religious propaganda aimed at shamans of Nenets people, natives of the north of Russia. Her background in painting helped her to create much more polished animation than Vertov’s.

During her career, she managed to produce over 20 animation films. Among them are Disney style Tom Thumb (black and white, sound, 1938)

and highly praised beautifully executed A Fire Glowing in Yaranga (color, sound, 1956) based on the folk tales of the native peoples of the Russian north.

Notice that both films the adaptations of folk tales, typical for the socialistic realism period of Soviet animation (1930s-1950s).