One of the earliest Soviet cartoons, Ice rink tells a simple story about a trickster boy in his budyonovka hat (a high top wool hat, part of the Bolshevik uniform during the Civil war) who sneaks into an ice rink and later has to flee from a fat NEPman. NEPman was a businessman during limited freedom of enterprise in the Soviet Union of the 1920s; the NEPmen were a popular target of Communist satire. His top hat and obesity are signs of a capitalist in Soviet iconography. Ice rink is one of the first cartoons featuring work of Ivan Ivanov-Vano, the patriarch of Soviet animation

Poster of agitprop (1921) featuring an evil capitalist in a high hat by one of the leading futurist poets, Vladimir Mayakovsky

About halfway between Western and Orthodox Christmas (January 7), it is worth to remember some of the Christmas-themed cartoons. The very first Christmas animated short was made by the stop-motion pioneer Wladyslaw Starewicz back in 1913. The Insects’ Christmas (Рождество обитателей леса) tells a dreamy story about a toy Father Christmas (Jack Frost, Дед Мороз) who leaves his Christmas tree and visits a frozen forest to bring the holiday spirit to creatures who live there. A frog, a ladybug, a dragonfly, and other insects join the party, get presents, skate, and have fun.

The Bug Trainer is a documentary film about Starevich produced in Lithuania. Interviews with film critics from Russia, Poland, Norway, and Lithuania are joined by an animated quest of the puppet Bug who falls in love with another puppet, the Lion Queen (uniting Starevich’s early films featuring bugs and his later masterpiece, The Tale of the Fox). The film is a mixed bag, and its animation  – unlike the one of Starevich – is the weak link. There is even an effort to depict Starevich himself to create surreal cinematic environment that does not look too convincing. On the other hand, the film features some rare shots of Starevich, fragments of his works, and brief bio. Sadly, his work during the 1940s-1950s is barely described. The film is serves as an introduction to works of the inventor of stop motion animation and tries to engage viewers describing the world of animated puppets. Recommended with reservations.

Nikolai Khodataev (born 120 years ago on May 9, 1892) presumably started shooting this avant-garde piece to be included in Aelita, another innovative film by Yakov Protazanov (1924) based on Alexei Tolstoy’s novel. 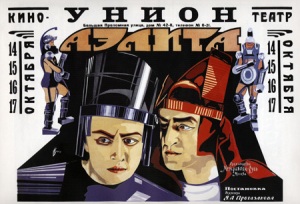 However, later it was completed as an independent piece. The early 1920s was the time of booming avant-garde art in the Soviet Union, not only in the film (Eisenstein’s The Strike an Battleship Potemkin, Dziga Vertov’s Kinoeye), but also visual art (Vladimir Tatlin, Lazar (El) Lissitzky), photography and design (Alexander Rodchenko). Many constructivist and futurist artists strongly supported the Bolsheviks considering themselves artistic revolutionaries. The plot reflects expectations of the unavoidable revolutions around the world. Having overcome class enemies on Earth, the Soviet champion flies to Mars to spark an interplanetary revolution. 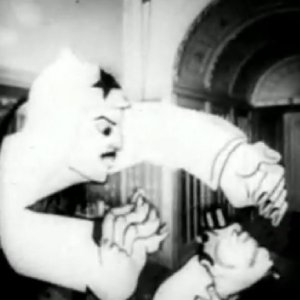 No capitalist could survive the Bolshevik warrior springing out of his mirror.

Khodataev employed cutout stop motion technique combining photographic and hand drawn backgrounds. He was one of the first Soviet animation directors who helped to establish this industry and produced over a dozen animated propaganda films until the mid-1930s when he switched to painting and sculpting.

Dziga Vertov (David Kaufman, 1896 – 1954) is  famous for his radical fresh approach to the documentary cinema.  His Man with a Movie Camera and Kino Eye became true classic of the Soviet avant-garde era of the 1920s. However, he managed to try himself as an animator, too.

In 1924 he directed one of the earliest Soviet animation Soviet Toys.  Like many works of Vertov, this animation short is a propaganda piece aimed at NEPman, a member of a new wealthy social class of the 1920s. NEP (New Economic Policy) was born in the result of the temporary liberalization of the Soviet economy in the 1920s. This animated film also aims at the Russian Orthodox Church that was suppressed during the 1920s-1930s particularly harshly although a caricature depiction of the fat corrupt priest was not atypical even for the pre-revolutionary Russia. The other priest is a satirical representation of the so-called Living Church (обновленцы) that was established in 1922 during the schism within the Orthodox church.

NEP helped to recover post-Civil War Russia, but was often criticized as a return of the capitalist past particularly by the left-wing activists and avant-garde artists like Vertov who promoted building of the new Communist society. NEP lasted for less than a decade, until Stalin became an ultimate Soviet leader in 1928. Vertov rather accurately predicted the decline of NEP: after the worker and peasant (literally) unite they manage to crush NEPman and take all his money. 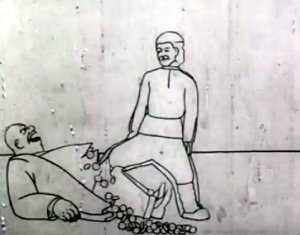 Soviet toys ends with the scene of the Christmas tree composed of the Red Army soldiers who literally hang fat NEPman, his girlfriend, both priest, and the worker and peasant climb to the top of the new social order. 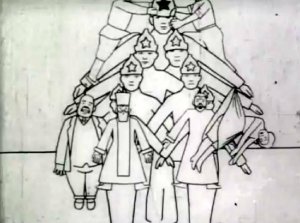 As Lenin stated, the capitalist will sell us rope with which we will hang them.  After NEP helped to recover the state of economy, it was prohibited and private entrepreneurs were forced to close their businesses.

Vertov was interested in exploring various media and employed animation technique in some of his documentaries, including stop motion sequence in his famous Man with a Movie Camera (Человек с киноаппаратом), 1929. Though roughly made, Soviet Toys is one of the important artifacts of the dawn of the Soviet animation.

Black and White (Черное и белое) is a 1932 cartoon based on the poem of Vladimir Mayakovsky. It is one of the propaganda pieces Mayakovsky wrote during his trip to the US and Cuba about poor black Willie who’s daring to confront a rich white sugar plantation tycoon. America and especially such topics as racial tensions and the Vietnam war would become a popular subject of the Soviet animation satire during 1950-1970s. This is one of the earliest films aimed at the US. It was also one of the first works of Ivan Ivanov-Vano and Leonid Amalrik. Both became prolific and influential film directors.

It’s interesting to notice that minimalistic approach to some scenes reminds avant-garde spirit of a graphic artist Vladimir Lebedev popular illustrator and poster maker who started his career in ROSTA Windows.

Китай в огне (China in Flames) is a significant effort of an early Soviet animation filmed in 1925. Apart from Olga Hodatayeva (mentioned in the previous post), the team included prominent animators like the Brumberg sisters and Ivan Ivanov-Vano. All of them had long and distinguished careers in the Soviet film-making.

China in Flames was shot using skillfully made paper cut outs. It’s a half hour long tour de force in the era most cartoons lasted 5-10 minutes. Like many pieces of the Soviet propagandist movies of the 1920s, it lacked Hollywood-style gags and looks more like a documentary about the evil Western capitalists and greedy Chinese landlords oppressing the Chinese peasants. However, the Communist Russia is ready to help the workers and peasants.

This piece lacks individual characters and represents the popular ideas of the 1920s when the whole nation, a human mass was considered the main character. Both Eisenstein (Strike, Potemkin) and Vertov (Man with a Movie Camera) despite different approaches promoted this view.  It would be later abandoned in favor of portraying strong leaders (Alexander Nevsky is probably the best example) connecting the image of a single ruler with the figure of Stalin during 1930-1950s.

Olga Khodatayeva (1894-1968) was one of the first women in Soviet animation. She mastered fine arts in Moscow, worked as an illustrator, and joined the industry in 1924. She worked in Sovkino (later Mosfilm) and since 1936 she was employed as an animation director by Soyuzmultfilm, the biggest Soviet animation studio established in the same year by Stalin.

In 1928 Olga Khodatayeva produced a silent animation short Samoyed Boy (Самоедский мальчик), an anti-religious propaganda aimed at shamans of Nenets people, natives of the north of Russia. Her background in painting helped her to create much more polished animation than Vertov’s.

During her career, she managed to produce over 20 animation films. Among them are Disney style Tom Thumb (black and white, sound, 1938)

and highly praised beautifully executed A Fire Glowing in Yaranga (color, sound, 1956) based on the folk tales of the native peoples of the Russian north.

Notice that both films the adaptations of folk tales, typical for the socialistic realism period of Soviet animation (1930s-1950s).

Over a century ago viewers already enjoyed animation in Russia.  Ladislas Starevich (Władysław Starewicz, born in Moscow to Polish parents in 1882) was a photography and entomology enthusiast. Employed by the Museum of Natural History, Starevich, passionate about new media, created a series of documentaries. For one of the films about stag beetles, he had to create puppets out of insects. Lucanus Cervus shot in 1910 was the first stop-motion effort of Starevich. The animation effort was highly praised by one of the first Russian producers, Aleksandr Khanzhonkov. Soon other animation shorts followed featuring puppets created out of insects, wire, and wax. Early viewers sometimes assumed that films featured live insects were trained by Starevich

Like many artists, Starevich moved to France after the Bolshevik revolution. Unlike many Russian directors and actors, Starevich built a successful career in cinema and animation in the interwar period. Some of his works include:

1934 – The Mascot – a story of a  puppy that was so popular that Starevich was asked to create a series with the same character.